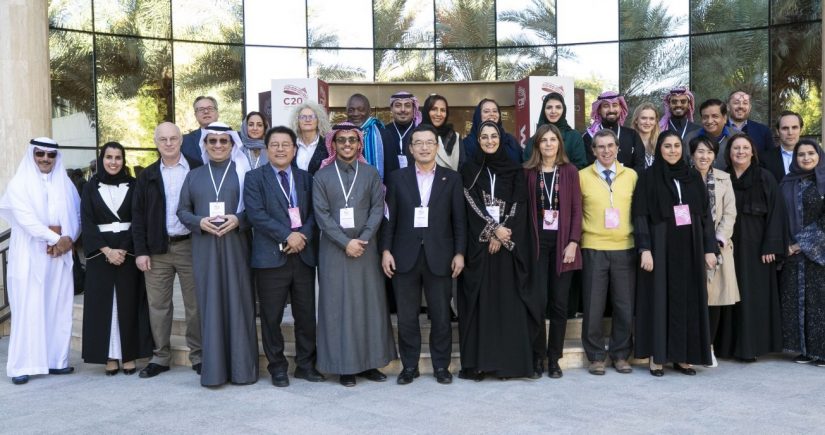 CoST is pleased be involved with the C20 again this year with Executive Director, Petter Matthews continuing his role as Chair of the Civil Society 20 (C20) Infrastructure Working Group and becoming a member of the C20 Steering Committee. In this blog, Petter reports from the C20 Kick-Off Meetings that were held recently in Riyadh, Saudi Arabia.

The Kingdom of Saudi Arabia recently became the first Arab nation to take on the G20 presidency. It did so at a time of heightened tension in the gulf region and against

the backdrop of the Australian bushfires that for many have become a frightening symbol of the climate emergency. Not surprisingly, these issues were prominent during the recently held C20 Kick-Off Meetings in Riyadh and they added a sense of urgency to the discussions.

The meetings began with presentations from the Minister of State and G20 Sherpa Dr. Fahad Almubarak and senior officials. They outlined their priorities for 2020 and discussed them with delegates. Infrastructure features prominently in the Kingdom’s priorities and it appears to be trying to strike a balance between ensuring continuity with previous presidencies and introducing its own perspective.

The most obvious example of continuity is the renewed emphasis on establishing infrastructure as an asset class. The G20 seeks through this approach to mobilise private investment to help meet the global backlog of infrastructure investment. The C20 has previously been critical of this approach and in particular, it considers it unrealistic to propose that private investment can meet the backlog in low-income countries where the risks are high and revenue streams difficult to establish. If there is one thing that I would like to try and bring to this debate over the course of the next year it is to ensure that policies are more evidence based and less ideological.

Amongst the issues where the Kingdom is introducing its own priorities are ‘technology and infrastructure’ and ‘water’. The first of these comes at an opportune time for CoST as we continue to roll-out the Open Contracting for Infrastructure Data Standard (OC4IDS) and as we consider how to share the benefits of the innovative Data Analytic Tool developed by CoST Ukraine. The G20 picked-up on this work last year when the OC4IDS was included in its Compendium of Good Practice. We hope to maintain the interest of the G20 and others this year as we prepare to release our latest tool, the CoST Infrastructure Transparency Index.

These are examples of technologies that are helping to transform infrastructure delivery and the ways that citizens and other stakeholders can influence the critical decisions that affect people’s lives. The G20 should continue to champion them in 2020 and this includes most importantly, G20 countries adopting them themselves.

Water too is an issue that will benefit from the attention of the G20 and it is not difficult to understand why the Kingdom is giving it a high-priority. Fifty per cent of Saudi Arabia’s consumption is groundwater – the rest coming from desalination – and it was predicted as recently as 2016 that the aquifers could dry up by 2029. And Saudi Arabia is not the only G20 country facing such pressure. The South African Department of Water predicts a deficit of about 3,000 billion litres of water per year by 2030 unless urgent action is taken to repair and improve infrastructure.

In the context of the climate emergency, water is likely to be one of the defining issues of the next fifty years and the G20 must begin to show more leadership. This includes most importantly realising the rights of all people to water and sanitation which were established by the UN in 2009.

The role of the C20 will be to keep this issue at the top of the global agenda and to focus on two key issues. The first is the needs of women and girls who are disproportionately affected when water is scarce. The second is the need to improve transparency and accountability in the provision of water and sanitation infrastructure and services, something CoST has been helping to achieve in its member countries Guatemala, Malawi and Afghanistan. In addition to infrastructure, the Kingdom has identified a range of other priorities in three categories and under the headline of ‘Realising Opportunities of the 21st Century For All’ (see adjacent box).

The reference to inequality in this heading echoes various G20 commitments since 2016 when leaders pledged to ‘reduce excessive imbalances, promote greater inclusiveness and reduce inequality in our pursuit of economic growth’. However, whilst some progress has been made on global inequality in recent years, at the national level, many countries continue to experience growing in-country inequality.

Whilst the C20 is still in the early stages of establishing its priorities, it is unthinkable that poverty and inequality will not be at the centre of its concerns. And as was made clear during the recent discussions in Riyadh, delegates are acutely aware of how the climate emergency, conflict and instability have the potential to reverse recent progress and deepen these problems.

Finally, and on a personal note, attendance at the C20 Kick-Off Meetings was my first visit to Saudi Arabia. For a country with a reputation for being closed and for restricting political rights and civil liberties, I found people to be remarkably open. Many of those I met were willing to discuss a wide range of topics including relations with Iran and the US and the social reforms that have been introduced by the Government since 2015. Reform is urgently needed in Saudi Arabia as it is in many G20 countries and the C20 will continue to make the case for it.