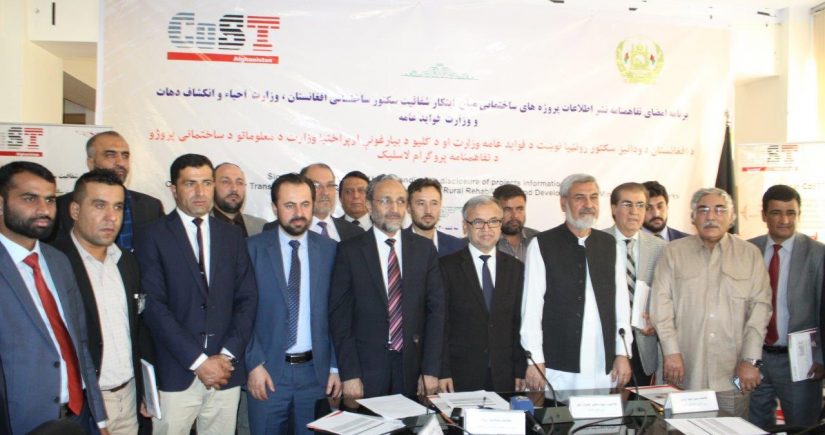 In June, the Ministry of Rural Rehabilitation and Development and the Ministry of Public Works signed two Memorandum of Understandings (MoUs) with CoST Afghanistan committing the ministries to disclose information on public infrastructure in accordance with the CoST Infrastructure Data Standard.

The MoUs were signed at an event where H.E. Abdul Satar Murad, Minister of Economy, H.E. Nasir Ahmad Durani, Minister of Rural Rehabilitation and Development and H.E. Mahmud Baligh, Minister of Public Works emphasised their commitment to ensuring transparency in public infrastructure.

Addressing government, the private sector, civil society and the media, H.E. Mahmud Baligh said, “We need to acknowledge that a lack of transparency and accountability only increases the distance between the Government and the public. Through these MoUs, we can help to minimise the distance. The Ministry of Public Works wants to be fully engaged in project information disclosure using the CoST International Data Standard alongside other accepted international practices.”

The CoST Infrastructure Data Standard comprises 40 data points that are disclosed at key stages throughout infrastructure projects. In addition to complying with the standard, the MoUs ensure the effective implementation of Afghanistan’s legal framework relating to transparency in infrastructure, namely its procurement law, procurement procedure and law on access to information.

The MoUs also commit the ministries to the CoST Assurance process which is one of the core components of the initiative, to identify key strengths and weaknesses in public infrastructure and make recommendations to address challenges. Since signing the MoUs, CoST Afghanistan has selected eight public infrastructure projects to be assessed in its first Assurance report, including projects relating to energy and water, rural roads and highways.

“Afghanistan has taken a significant step towards instituting a culture of information disclosure. In this environment, the public can be fully involved in the decision-making process and trust can be built between citizens and the government,” said the CoST Afghanistan National Co-Ordinator, Mr Sebghatullah Karimi.