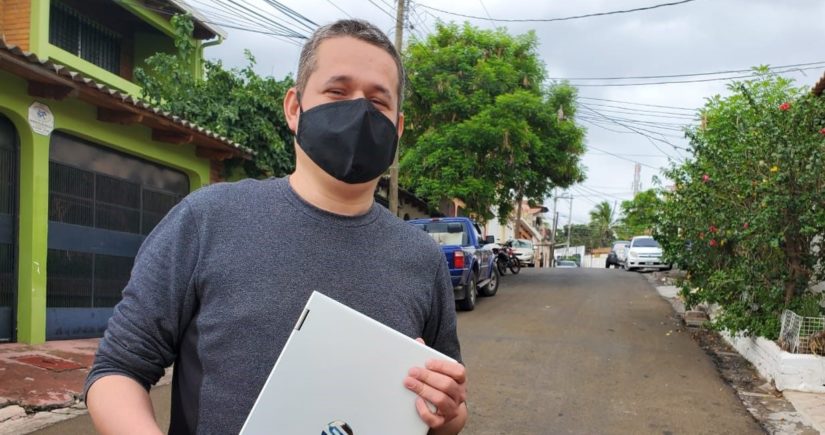 The first part revealed conflicts of interest in contracts awarded by the government investment body Invest-H: the same companies contracted to monitor the construction of healthcare facilities for COVID-19 patients have also been contracted to design the projects. This means any faults in project design are less likely to be raised or addressed, running the risk that this critical health infrastructure – worth over US $6.3 million – will be of poor quality. His second story went on to reveal that four of the companies hired to build these facilities had been offered contracts with no quote for their services.

Congratulations on winning CoST Honduras’s Journalism Prize. One of your pieces uncovered a conflict of interest around the construction of healthcare facilities – what prompted you to start exploring this area?

Initially, when I saw how little transparency there was in the emergency procurement carried out during COVID-19. At this point, there was not much interest in the procurement of public works, so I decided to focus on this area. Another factor that prompted me begin this investigation is my passion for public procurement research.

Can you explain the process behind the investigation – how did you uncover the conflict of interest, and what tools did you find most useful?

I discovered the conflict of interest after reviewing the different contracts for the construction of mobile hospitals for patients with COVID-19, and the supervision of those projects. I found there was a single type of supervision contract: the functions given to supervisors were all the same. I then noted that all the contracts indicated supervisors also had to carry out work which usually would be given to the constructor, such as carrying out topographic surveys, preparing floor plans and designing the facilities.

The tool I used was the Invest-H Transparency Portal, which publishes information relating to investment in response to the pandemic and which was created on the instruction of the Institute for Access to Public Information. However, in my opinion, this site provides insufficient information for the public to oversee all stages of the project cycle which will be included in a contract, including contract award, project preparation and execution. The latter includes the administration of the contract itself.

Open data is key to the work of investigative journalists. Did you come across any barriers to accessing this information, or were there any other challenges?

The main barrier I found to accessing the information was the messy way the documents were uploaded, where there is no alignment to the step-by-step process of awarding contracts. For example, they upload up to six contracts – for both monitoring and construction – in a single PDF file, so it’s difficult to know when one ends and starts the other, or even what type it is. The clutter is monumental, so the portal guidelines must be improved.

There should also be guidelines on what constitutes a legally binding contract, so that the company knows if all the regulatory, technical and other criteria were met. This would also benefit citizens who are uninformed as to how public procurement works.

Rubén Reyes (of Invest-H) has attributed the conflict of interest which you uncovered to the ‘emergency situation’ of COVID-19. With so much fast-paced public spending, how can we can ensure these oversights do not become commonplace?

An extraordinary situation, such as COVID-19, also requires extraordinary transparency measures.  I think a good option is to create what I would call a ”protocol” for monitoring the contracting process, in real time. This would mean contract information is published on the same day the contract is prepared. If, for instance, we know the terms of reference in advance of a contract being signed, the potential conflict of interest can be identified before this is done. In addition, the contracting party must be required to disclose the list of companies to which it will request a quote.

The Law on Transparency and Access to Public Information states that institutions have ten days to disclose information from the moment a contract is generated, but because of the speed with which services are procured in an emergency, that is too long. Similarly, we need to closely examine the State Procurement Act to identify the loopholes that generate the conflict of interests.

Your second winning piece shows Invest-H hired four companies directly, but with no specific quote for their services. Again, this was attributed to the extraordinary situation of COVID-19. For taxpayers in Honduras, what are the risks of these types of contracts with limited specifications?

If there is no technical specification in the contract, arbitrary changes can be made to the works because of this lack of detail. If a contractor says they need to make design modifications and this is approved, the value of the contract may go up with no justification at all, or simply because of poor planning. And this is further complicated if there is a conflict of interest between the contractor and supervisor of the works, who could endorse a change of this nature to increase the contract value.

CoST Honduras has developed a number of tools to support journalists as they investigate infrastructure (SISOCS, SISOCS APP, the Investigative Diploma for Journalists). How important is it to have access to those types of tools and training opportunities?

These types of tool are essential, but if society is not empowered from it, and strategies are not implemented to improve its reach across society, the impact is minimal. The government’s procurement mechanisms are opaque, so it is vital that there are tools to facilitate journalistic research. With regard to the diplomas, they are fundamental to ensuring journalists are qualified to oversee this activity, and to understand these processes fully. A key part of investigating public works is understanding the legal frameworks which govern procurement systems, because these are the nooks and crannies where corruption hides. Without guidance to get there, it’s almost blind research.