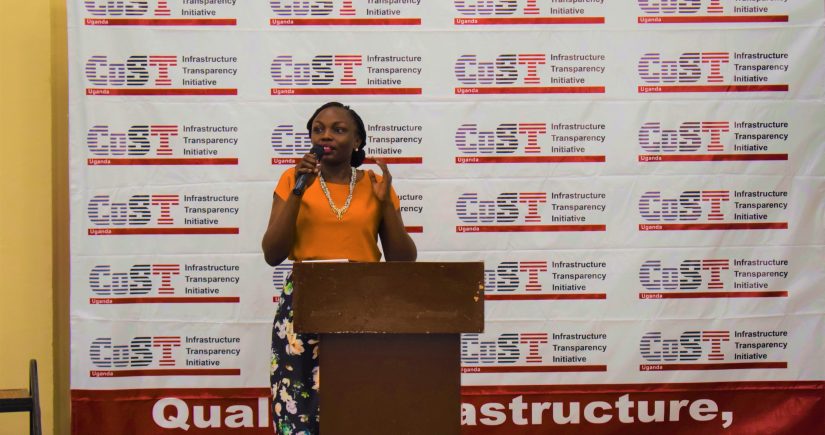 CoST recently spoke to Pamela Acheng, a civil engineer based in Kampala, Uganda who has worked with CoST Uganda since 2017 as part of the assurance team. After completing her bachelor’s degree at Kampala’s Makerere University, Pamela received her master’s degree in civil engineering from Bath University and went on to work in various roles including with Uganda’s Ministry of Works and Transport (MoWT), in the private sector and with the UNHCR in Uganda. She is currently a lecturer at Makerere University in Construction Management.

What attracted you to civil engineering?

I like building stuff! When I was at school, we had a female civil engineer who came and spoke as part of our career guidance. She was working on a building project and talked to us about how she designed it, and it was in line with what I wanted to do – I wanted to build things.

There is a perception that engineering is male dominated – what has been your experience working in the sector?

Based on my undergraduate experience, I would agree – there were 103 in my class and only 10 of those were girls. Even when I took up professional work it was still the same, there were few females at the MoWT, however I think this presents an opportunity for women to shine.

There is currently a lot of input from the government to encourage girls to take up more science courses in Uganda, and I’m part of a team which goes to secondary schools and encourages them to get involved in civil engineering. Quite often this means letting girls know they won’t be standing on the roadside laying down concrete as a civil engineer. It’s about challenging perceptions of the industry which can be off-putting for them.

What else could be done to encourage more girls into the sector – are there structural issues at play or is the lack of female involvement more to do with misconceptions about the industry?

I would say this is not structural, but cultural. Previously there were fewer girls in school generally in Uganda as they were expected to be at home. Many students at secondary school are from families who may not be able to pay fees for the whole family, and they will see it as a better ‘investment’ to send the boys to school. At a primary school level, the government put in place universal primary education which subsidised fees, and it is looking at universal secondary education as well with the aim of levelling the ratio of boys and girls there.

Regarding civil engineering, there’s a misconception – when someone says ‘civil engineering’, you automatically think of someone mixing cement. I actually wanted to study electrical engineering, but when I was given the talk as part of my career guidance I realised I might be more interested in civil engineering. So I think some of the barriers involve these misconceptions. But we also need more female civil engineers out there showcasing the profession – girls can then begin to realise this is a good course. For instance, Winnie Byanyima was the first female aeronautical engineer in the country which encouraged a lot of girls to look at STEM subjects – she was at Oxfam, she’s now moved to UNAIDS, and these ambassadors really encourage girls.

Do you think issues such as climate change could be used to build a narrative to attract a more diverse cohort to engineering – the idea of building infrastructure which is resilient for instance?

Yes, totally. Before the lady came to talk to us at our careers guidance, my idea of civil engineering was standing on a site. And over time I began to realise there’s a lot more to the industry.

You could be a hydrologist looking at water and sanitation, you have structures, you have roads, you have bridges: issues of climate change cut across all of these. It helps to realise how extensive the impact of engineering can be.

One professor said to me: civil engineers are like semi-gods, if you put up a structure which is poorly designed and it collapses it will kill people. What you’re doing has an impact which can actually change a life. If you build a water system in a refugee camp, it changes lives. By understanding that impact you find some sense of purpose in what you’re doing. We’re now in a situation where our structures are no longer resilient, so we need to ensure we make an impact by designing structures which are.