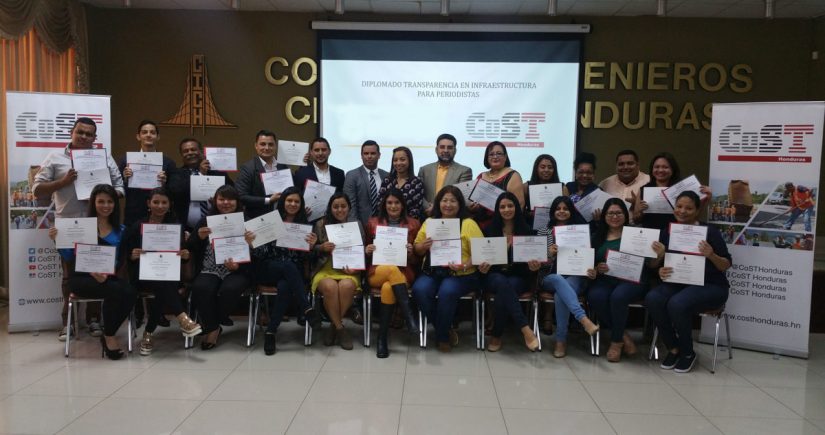 CoST Honduras is continuing to work closely with the media throughout the country, by formalising its alliance with the Honduras Journalist Association (HJA) and launching the third Investigative Diploma for Journalists. Firmly aligned with the CoST core feature of social accountability, CoST Honduras has taken strong measures in recent years to equip journalists with the investigative tools to uncover the misallocation of public funds in infrastructure.

CoST Honduras and the National Autonomous University of Honduras launched the third Investigative Diploma for Journalists in April. Engaging with the media is a crucial aspect of the CoST approach: once key issues are put in the public domain, pressure is applied on government to deal with problems and ensure they do not reoccur. Ultimately, this results in better quality public infrastructure that enables communities to thrive and builds trust between citizens and politicians.

To this end, the Investigative Diploma teaches the methods and techniques needed to investigate infrastructure projects, as well as the sources of information for doing so. These skills will ensure that journalists and media in Honduras continue to play a pivotal role in overseeing public infrastructure.

Throughout the diploma, journalists cover a broad range of topics including the political framework for transparency in Honduras; access to information in infrastructure; the life cycle of public infrastructure projects and investigative journalism methods.

In addition to the diploma, CoST Honduras has held three journalism awards for infrastructure transparency reporting which have resulted in key issues being uncovered. In 2017, it awarded first prize to Mr Josue Quintana for an article exposing a miscalculation on a road and bridge expansion and reconstruction project. Thanks to recommendations from the CoST Honduras assurance process and pressure like this from the media, the government is now reviewing the contract.

formal alliance with the HJA. The alliance was sought to strengthen the capacity of journalists throughout the country with regards to transparency and social oversight in public infrastructure projects. The HJA will now participate in workshops and courses for journalists convened by CoST Honduras.In April, Tania Murillo, coordinator of the CoST Honduras Multi-Stakeholder Group signed a cooperation agreement with Dagoberto Rodríguez, President of the HJA.

Mr Rodríguez said:
“We are thrilled to sign this cooperation agreement, which reaffirms our commitment to promote the capacity of our members, but above all to be a fundamental bastion for the essential right to access information and ensure accountability.’’