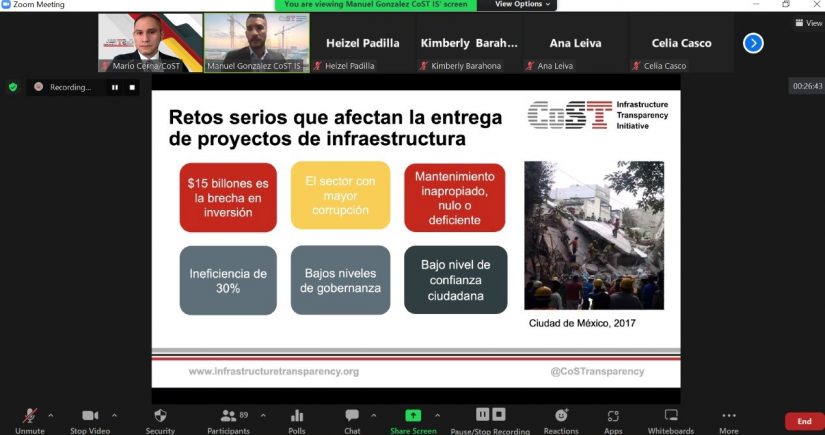 During the last years, CoST has played a leading role sharing experiences and participating as an actor of change and as partners of the Open Government Partnerships (OGP), with who share principles and values around transparency, accountability, participation and use of technology.

CoST and its Latin America programmes participated in the online event Open Government Week, a civic space in which CoST exchanged achievements and lessons learned aligned with OGP actions plans.

In the 90 minute online event in May 2022, CoST managers, Heizel Padilla from Guatemala; Yudina Castillo from Honduras; Aida Martínez from Panamá; and from Ecuador Paúl Proaño of SERCOP, the multi-stakeholder member; shared each of the countries’ experiences and challenges faced to open public infrastructure considering the Covid-19 pandemic, natural disasters, limited access to technology and public procurement systems.

This space offered an opportunity to promote research and strategic leadership with key actors from different countries around the Latin American region, based on CoST impact histories. Over 100 participants from Latin America attended the online event.

CoST works globally, disclosing, validating and interpreting data on infrastructure projects so that decision makers are held to account.

Since 2015 our achievements include: 76,767 projects disclosed in line with the CoST Infrastructure Data Standard, 625 projects reviewed by CoST members and 8,177 government representatives trained.

As for Guatemala, in terms of Open Government, they have made huge advances in creating a dynamic multisectorial group and looking forward to continuing identifying more key actors that can strengthen their objectives.

Guatemala has established areas for improvement for public works disclosure and their effort has led to having an influential role in recommendations for hospital infrastructure, especially after the vulnerability in the public health systems became evident in the Covid-19 pandemic.

Aida Martínez, Panamá’s CoST manager, emphasizes how the Civil Society and Private Sector have a leading role in their action plans related to Open Government.

Martínez shares how they have managed to transcend transparency not only in infrastructure but also in goods and services, calling this initiative as a promising action or a big potential compromise.

Panamá’s country manager, Aida Martínez, shares with us the great role and commitment of the Private Sector and Civil Society in @CostPanama action plans and how their work in transcending #transparency in #infrastructure has influenced the transparency of goods and services👏 pic.twitter.com/VE2QWiyM8B

Paúl Proaño from SERCOP, said it is really important to communicate the availability of the tools, to spread the knowledge of their existence to each citizen.

Also, empower people to have access to the information by providing proper training in the use of the tools and platforms available.

Within the contributions CoST Honduras has made in the implementation of the principles of open government, they have participated in the third and fourth Open Government Action Plan, the opening of spaces for citizen participation and training both virtual and face-to-face courses in partnerships with the National University Autonomous of Honduras.

The creation of the SISOCS platform and their recently updated version (SISOCS 3.0) will promote greater dissemination of information by presenting the information in a more user-friendly form to citizens.

This approach has led to CoST saved hundreds of millions of dollars, reformed scores of public institutions, increased competition and improved the quality of infrastructure and services for millions of people.