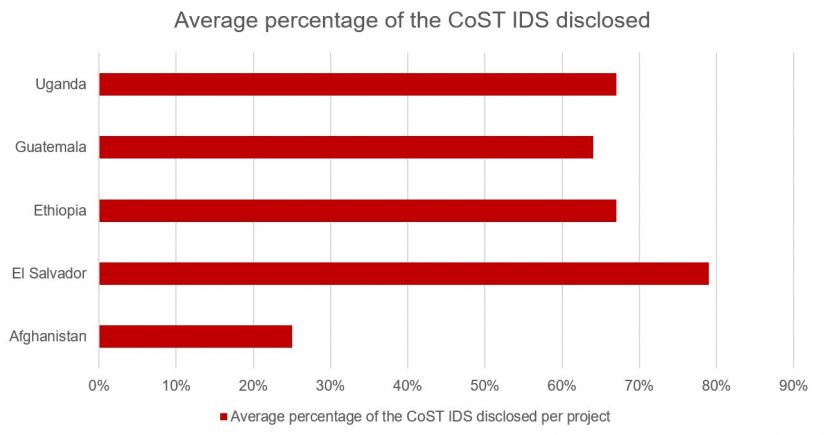 This week you may have read how our CoST programmes in Afghanistan, El Salvador, Ethiopia, Guatemala and, today, in Uganda have used data disclosed from 72 infrastructure projects and turned it into compelling information using the CoST assurance process. By the end of 2018, 12 Assurance reports will have been published from 10 countries across four continents covering 120 infrastructure projects – an almost 100% increase on 2017.

Earlier this week, we laid out how the CoST assurance process complements and adds value to existing audit mechanisms and why it can be a deterrent for poor performance. In this blog, we take a deep dive into the type of data and key issues that an assurance report can generate and how it can be used as a catalyst for project improvements and sector reforms.

Initially, each assurance report has provided a measure of transparency based on the amount of data disclosed to the public in line with the CoST Infrastructure Data Standard. As you can see below the example from the CoST Honduras assurance process shows how transparency can be measured year-on-year. It also demonstrates how the CoST approach has helped to increase transparency since a 2015 baseline survey of disclosure. The second graph the provides some indicative cross-country comparison with El Salvador having the highest disclosure rate and Afghanistan the lowest. For a CoST member, the value of the report is using the data to identify performance trends that can be monitored on an annual basis. Our Theory of Change presumes that greater transparency and accountability will lead to improvements in performance and the market place. Consequently, we expect to see more companies encouraged to bid and fewer projects with increases in cost and duration.

To date, we have been able to identify that the average duration of an infrastructure project contract has increased by an average of 90% and its cost has increased by an average of 23% based on data from 86 projects from the 2018 assurance reports. Whilst the consequences of cost increases are well understood, infrastructure that takes twice as long to build than expected may have a greater impact as it reduces the potential economic and social return from the investment.

Average increases in the duration and cost of an infrastructure project¹

Why are these increases so high? Well the issues of concern identified in the assurance reports can help to explain. The reports do not state if the issue raised is due to corruption or mismanagement but by setting out the facts they empower stakeholders to challenge decision-makers and hold them to account. The table below provides some examples of issues of concern that have been raised during #CoSTAssuranceWeek.

Examples of issues of concern identified in 2018 assurance reports

By tabulating the issues of concern, patterns can emerge that provide an indicator of the key risks or red flags within the project cycle. For example, CoST Afghanistan have been able to identify that the high increases in construction time is directly linked to poor project preparation. We intend to assess if this is a common trend and identify other potential patterns as we draw together the data from the assurance reports from the last three years on a data set of 250 infrastructure projects. We will also be developing a new guidance note, manual and templates that will assist CoST members and others who believe the CoST assurance process adds value in improving infrastructure delivery.

A catalyst for project improvements and sector reforms

In our blog published earlier this week, we highlighted how the issues of concern and recommendations in an assurance report have been a catalyst for government actions and reform in Uganda, Ukraine and Malawi. It has also led to a $US 3.5 million cost saving on a road project in Ethiopia and budget reforms in Guatemala.

Multi-stakeholder groups (MSGs) which oversee CoST programmes are now taking a more strategic approach to following-up on the findings and recommendations from an assurance report. CoST Honduras has taken the lead by developing an action plan concerning three procuring entities that sets out how each organisation will respond to the recommendations. This has led to government action on three Public Private Partnership road schemes including a new financial model for the tourist corridor toll road scheme and ensuring private financing is approved before construction commences. This demonstrates the potential for the CoST approach to open up and improve the outcomes of what are often controversial and opaque projects.

In the coming weeks, MSGs in Afghanistan, El Salvador, Ethiopia, Guatemala and Uganda will be engaging their communities and decision-makers with their respective reports to encourage action to be taken that will ultimately lead to better infrastructure for all.

1. Please note this does not include data from the Thailand and Honduras reports that have been recently finalised. We are also still clarifying the cost increase in Tanzania. Finally, cost increases in Thailand are illegal hence why it is zero.