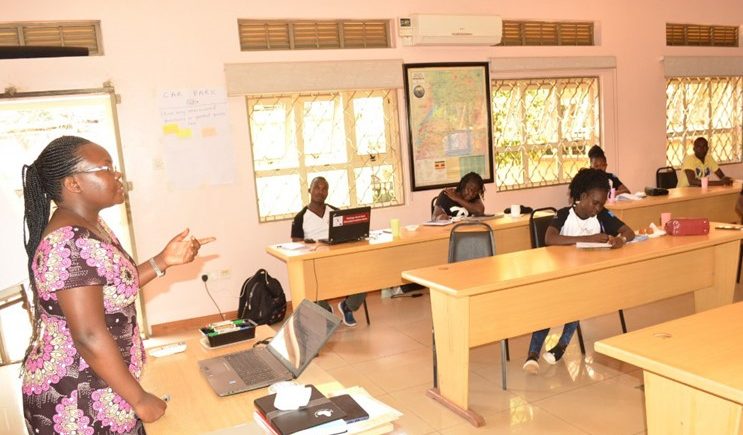 The media plays a great role in information dissemination, but often times journalists are put to blame either because their publications are “lacking” or they are “subjective”. CoST believes that the media is player in advancing infrastructure transparency and accountability and without which, our multi-stakeholder arrangement will be incomplete.

In this blog, CoST Uganda Manager and Africa Regional Manager, Olive Kabatwairwe reflects on the how CoST Uganda has built the capacity of journalist, civil society and key associations providing training and mentorship on thematic issues in influencing infrastructure transparency.

CoST Uganda initiated its infrastructure journalism journey way back in August 2017 following the dissemination of the First Assurance Report. The idea was to help the programme identify those journalists who had interest in infrastructure reporting and documentation, information sharing and advocacy.

Broadly, the initiative was aimed at increasing media presence in the infrastructure sector, but also, change the narrative that existed by then regarding the quality of journalistic pieces which were unresearched, subjective and at times associated with complaints with less solutions to the sector. As the interest in infrastructure journalism grows to greater heights, the invite by ACME was handy to engage with selected journalists from the South West, North, East, Central and Eastern regions of Uganda.

Uganda invests about 32.8% of the Government’s total annual expenditure, while public procurement takes approximately 60% of the annual national budget according to the World Bank. Uganda is operating at an infrastructure deficit of about US$1.4 billion a year, with a loss of nearly US$300 million per year lost in inefficient infrastructure spending, under-pricing, and project variations. CoST asserts that, informed citizens and responsive public institutions can help drive reforms that reduce mismanagement, poor infrastructure and inefficiency.

The role of all stakeholders in influencing reforms on how infrastructure projects are planned, prepared, procured, implemented and maintained is critical to the realisation of the United Nations Sustainable Development Goals with focus on Goal 9; industry, innovation and infrastructure, Goal 6; Clean Water and Sanitation among others.

I recently gave a talk to 15 journalists from across the five regions of Uganda at the Africa Centre for Media Excellence (ACME). The training session with the journalists was an opportunity for us to speak about CoST, the core features and the value of CoST work with journalists. It also allowed us to broaden the discussion to what kind of information the journalists can request for, from whom, and what information is freely available online with the Access to Information Law 2005 and Regulations 2011.

Journalists were also cautioned on writing right with a critical look at the facets of a good story with focus on planning, data sourcing, analysis and presentation phases. I was able to share examples of platforms where journalists can access data to inform their journalistic pieces such as the Government Procurement Portal which had been aligned to the Open Contracting for Infrastructure Data Standard (OC4IDS) and the latest published Infrastructure Transparency Index by CoST Uganda.

One journalist at the ACME session said, ‘’I often write articles on infrastructure projects but, my challenge has been lacking of information. I have had challenges getting information, but officials are non-responsive to requests and soon the story is not newsworthy anymore due to delays in receipt of information. I also do not comprehend the procurement process. The training helped me understand where I can quickly access information and how to engage officials to get timely information.”

During the ACME media session, the journalists appreciated that they had been writing without properly investigating projects. In addition, they were not asking the right questions, not approaching the right respondents, were asking for information from the wrong sources and did not understand the right to information law/ let alone, the Access to Information Request Form.

Journalists also did less literature reviews which affected the quality of stories they published. Some of them acknowledged that they often produced journalistic pieces to meet their contractual obligations (number of articles, news submitted to their employers which often times affected their career growth) and had less focus on influencing reforms and actions on issues raised. Others wrote to break the news but with less evidence to influence action. Journalists also appreciated that engaging in the infrastructure sector calls for concerted efforts, dedication and an understanding of the various phases an infrastructure project goes through. And that, they ought to go to investigate with the right information to inform acquisition of the right results.

At the end of the session, the journalists committed to specializing (with more emphasis) on infrastructure transparency and accountability journalism, they committed to writing to influence and not the writing to inform alone. We are thrilled to see a team of committed Ugandans who are interested in investigating how public infrastructure projects are planned, procured, implemented and maintained and are focused at influencing reforms that improve the quality of infrastructure.

Reflecting on the training, one of the journalist said ‘’I work with several media houses and my target is to submit a story to each every day, I rarely focus on the quality because all I need is to raise the required number of articles. But with this training, I am re-thinking my approach and determined to do more research to publish more informative and influential stories’.’

In conclusion engagements with journalists such as the one with ACME’s team of journalists have enabled us to: